“I am preparing myself for the next move,“ she replies. “The last move.” She looks him in the eye; she is calm; she seems to be entirely serious. “I am accustoming myself to living in the company of beings whose mode of being is unlike mine, more unlike mine than my human intellect will ever be able to grasp. Does that make sense to you?”
J.M. Coetzee: "The Old Woman and the Cats"

5 p.m.
Discussion
J.M. Coetzee: "The Old Woman and the Cats“

Food and drinks will be provided.

J.M. Coetzee: "The Old Woman and the Cats"
The short story "The Old Woman and the Cats" by J. M. Coetzee was originally published in a catalogue of Belgian sculptor Berlinde De Bruyckere accompanying her exhibition at Belgian Pavillon in Venice in 2013. The texts tells a story of an older woman (resembling Elisabeth Costello - a literary character created by Coetzee), a university professor that decides to live in a small village with a growing group of feral cats and a mentally disabled person. In the story she is visited by her son who - himself very different than his mother - tries to understand what motivates her to live in this way. The short story refers to such themes as relations between humans and animals, uprootedness and exclusionand a philosophical attitude that could be summarized as "radical hospitality".

During the meeting we will read loud selected fragments of the short story and analyze them together in the context of the exhibition on view at Temporary Gallery.

If you would like to receive the text in advance, please write to info@temporarygallery.org.

Artist Talk with Laurent-David Garnier
Laurent-David Garnier is an artist and independent perfumer based in Amsterdam, where he is currently completing his MFA at the Sandberg Instituut. He studied chemistry and perfumery in Paris and Versailles and worked for many years as a senior perfumer for the fragrance industry. The work „Smell“, on view in the current exhibition, is an olfactory installation by Laurent-David Garnier in collaboration with Janek Simon. It is based on an artwork realized by Janek Simon at CCA Kronika in Bytom, Poland in 2006. By means of burning some gunpowder in one of the exhibition spaces the artist created a smell of burning that suggested a recent explosion. Later, in 2014, the work was re-created in Amsterdam for the exhibition “Father, Can’t You See I’m Burning?“ curated by the participants of de Appel Curatorial Program. Due to the security reasons it was not possible to burn anything in the gallery so Simon invited another artist, Laurent-David Garnier, to produce a liquid version of the work. “Smell” belongs to a group of artworks in which the artist touches upon the problem of catastrophe – a possible end of civilization.

Fabrizio Terranova: "Donna Haraway: Story Telling for Earthly Survival", 2016, 81 min
For several decades, Donna Haraway is concerned with the dissolution of boundaries between humans, animals and machines from a feminist and post-colonial perspective. Fabrizio Terranova’s film is an experimental almost surreal documentation of a dialogue with the writer talking about her influences, the Cthulucene, science fiction, sexuality, nature and about the need for new narratives and new forms of story telling against a patriarchal capitalism. In the current exhibition, we show a fragment of the film with Haraway reading from one of her short stories imagining a symbiotic relation between humans and animals to overcome the current deadlocks of the human situation. 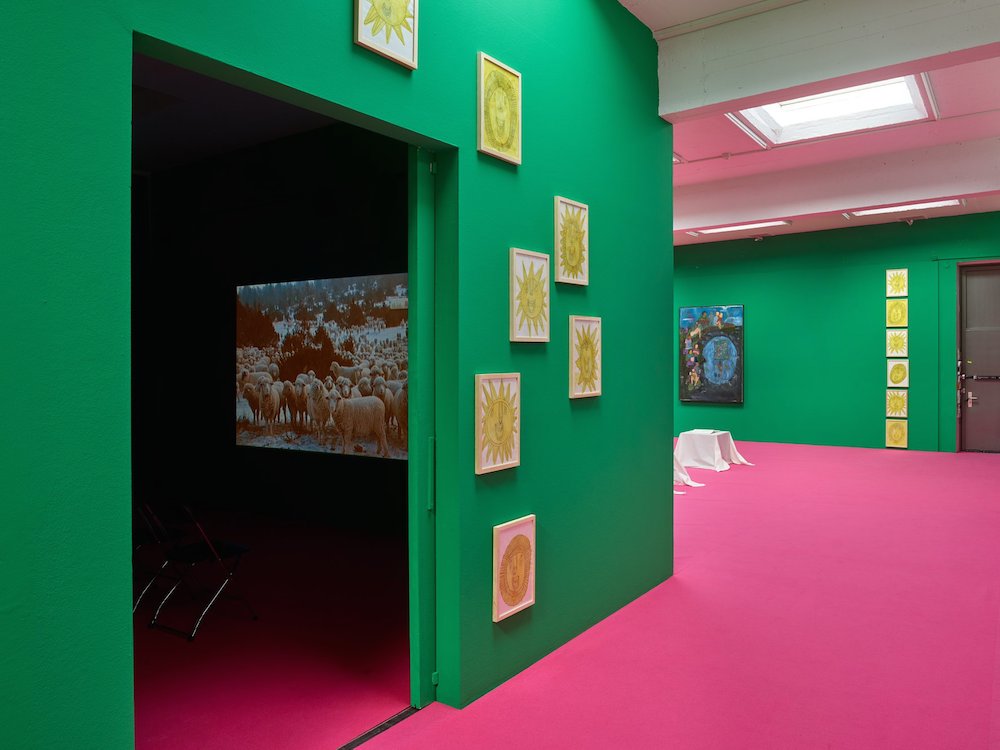