What’s the role of art in a world facing multiple and simultaneous crises, above all the climate one? Is there a use of art that is beneficial to society or are its apparently non-functional ways of operating sufficiently useful to find unexpected perspectives and solutions? These questions will guide the talk by Matteo Lucchetti in exploring several art projects that tackle the urgencies of our times. In doing so he will present the Visible project (Cittadellarte - Fondazione Pistoletto / Fondazione Zegna) – that he curates with Judith Wielander – in its ten-year-long trajectory, discussing the creation of a transnational network that researches and supports socially engaged artistic practices, together with some specific commissions developed in 2021, and continuing this year, with Cooking Sections and Jasmeen Patheja.

Italian born, Matteo Lucchetti is a curator, art historian, and writer. His main curatorial interests are focused on artistic practices that redefine the role of art and the artist in society. His curatorial projects include Marzia Migliora. The Spectre of Malthus, MA*GA, Gallarate; Sammy Baloji. Other Tales, Lunds Konsthall and Kunsthal Aarhus, 2020; First Person Plural: Empathy, Intimacy, Irony, and Anger, BAK, Utrecht, 2018; Marinella Senatore: Piazza Universale. Social Stages, Queens Museum, New York, 2017; De Rerum Rurale, 16th Rome Quadriennale, Rome, 2016; Don’t Embarrass the Bureau, Lunds Konsthall, Lund, 2014; Enacting Populism in its Mediæscape, Kadist Art Foundation, Paris, 2012; and Practicing Memory, Fondazione Pistoletto, Biella, 2010.
In the projects he curated, Lucchetti has worked with artists such as Lawrence Abu Hamdan, Rossella Biscotti, Nástio Mosquito, Marinella Senatore, Jonas Staal, SUPERFLEX, Stefanos Tsivopoulos, Pilvi Takala, and Stephen Willats, among others
Since 2010, Lucchetti curates the Visible project (Cittadellarte-Fondazione Pistoletto/Fondazione Zegna), with Judith Wielander, and in 2020 they co-founded, together with Locales in Rome, The Orchestras of Transformation, an agency to promote artistic imageries for the 2030 agenda for sustainable development goals. He also served as Curator of Exhibitions and Public Programs at BAK, basis voor actuele kunst, Utrecht in 2017–2018.
Lucchetti has worked as a curator in residence at Para Site, Hong Kong; Kadist Art Foundation, Paris; and AIR, Antwerp. During his residency at BAK in 2010, Lucchetti worked in the frame of the Former West project to develop curatorial and discursive possibilities for the new online platform of the research—the digital archive. He has organized and taken part in several seminars, talks, and debates at various institutions, such as the Centre d’Art Contemporain, Geneva; Steirischer Herbst, Graz; and the Centre for Historical Reenactments, Johannesburg. He lectured as a guest professor at HISK, Gent; Piet Zwart Institute, Rotterdam; Sint Lucas Antwerpen, Antwerp; and Accademia di Belle Arti di Brera, Milan, and contributed to magazines such as Mousse Magazine, Manifesta Journal, and Art Agenda. 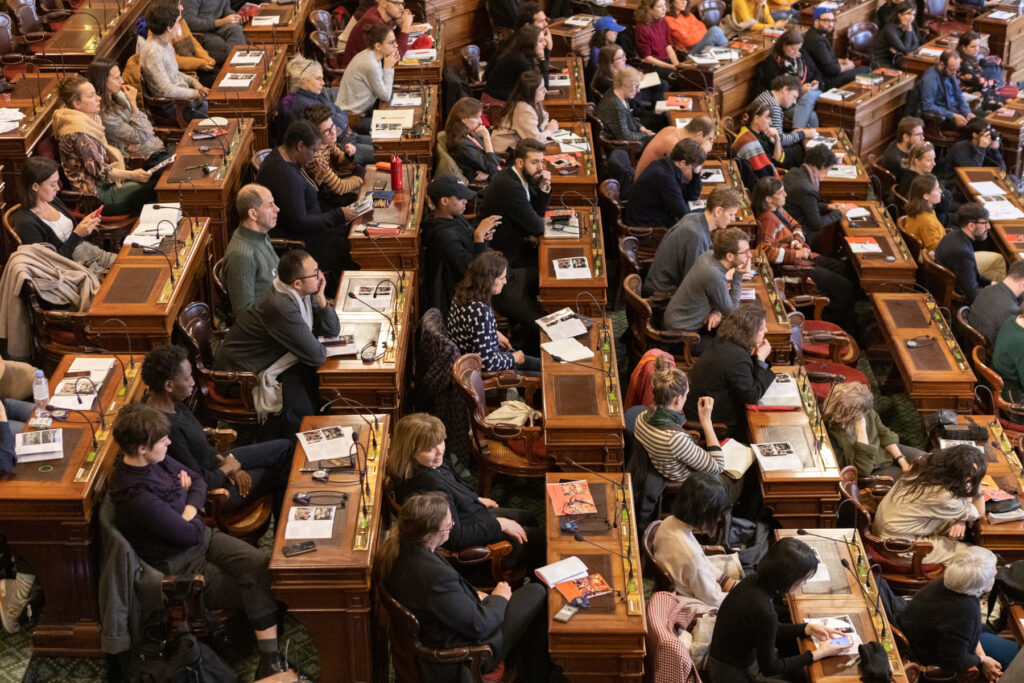