ON CATALYSING FIGURES, EMANCIPATION OF PLANTS AND MAKING THE WHITE-CUBE DIRTY
A double talk by Julia Haarmann and Aneta Rostkowska
Fri 18 September 2020, 5 — 9 p.m.

The number of participants is limited. Please book a seat at info@temporarygallery.org.

Julia Haarmann will give a tour of the exhibition "Process as Resistance, Resilience and Regeneration". When viewing the exhibited works together, she will address various motivations and methods of process-oriented work.

Cologne’s only artist residence, CAT Cologne, celebrates its tenth anniversary with a group exhibition in an unusual location. In September, 15 artists will show process-oriented works in an archway near Cologne Central Station. In response to the recent general socio-global insecurity and in search of a new consensus, these negotiate possible solutions.
Performances, interactive and time-based media unfold from three perspectives. This includes processes informing the work prior to production which are mostly related to community knowledge, cultural and biographical background. Processes that unfold at the moment of production take a look at synergies and networks. The third perspective focuses on methods of outreach and activation that ideally manifest as sustainable effects such as advancing social change or ecological awareness. Art becomes a statement, a tool to take action and to examine complex layers of our living conditions. Instead of suggesting potential solutions, the catalyst potential inherent to the arts is rather to point to the actual questions and to raise awareness. The exhibition therefore sets up a specific context for such “’catalysing figures’ (…) capable of inventing and activating new visions of a reality of which countless details tend to slip unnoticed past the common gaze, influenced not only by the stereotypes broadly promoted in the mass media, but also by a widespread amnesia with regard to civil and human rights”.
With its focus on socially engaged and community-based work, CAT (‘Community Art Team’) has hosted more than 50 international artists and projects since 2010. To respond to the fact that the projects usually set focus on processes stipulated during the residencies and mostly manifest outside the white cube, works deriving from these and related projects are now translated into an exhibition context. They are further complemented with works by artists associated to the program. The exhibition is located in an urban setting, which is both protected yet characterized by mobility and transit, offers an ideal environment to experience the process-oriented work. The public space is informed by permanent negotiation, thus critically engaging with the fixiticy of formal structures. This environment takes into account the transformative character of the works.

Julia Haarmann studied Art History and Sociology in Freiburg, Paris and Berlin. She is a graduate of the Art Administration program at New York University and the curatorial program at UDK, Berlin. After working for international galleries for more than ten years she has been director of CAT Cologne since 2010. Since 2018 she is also a member of the advisory board for the department “Culture as an Agent of urban Society” of the city of Cologne. Her curatorial focus is on such an artistic practice that understands art as a medium which translates between disciplines, places, times and people. She is interested in relevant and meaningful potentials of art a community builder, disrupter and instigator that broadens perspectives. A recurring element in her work is to use the social environment as a resource, medium and addressee at the same time.

Aneta Rostkowska will present a talk on the occassion of the last days of the exhibition „Floraphilia. Revolution of plants“ at Temporary Gallery, Centre for Contemporary Art

She will talk about the project Floraphilia: On the Interrelations of the Plant World, Botany and Colonialism dedicated to the political meaning of plants and focus on two exhibitions: Floraphilia. Plants as Archives, realized at the Academy of the Arts of the World in Cologne in 2018 and Floraphilia. Revolution of Plants, which opened as part of the Warsaw Biennale in October in 2019 and is currently on view at the Temporary Gallery. The first one illuminated the social and political aspects of the history of plants, botany and botanical gardens. Presented artworks referred to plants’ co-option throughout colonial history and history in general, as well as to their economic, feminist and migratory contexts. The second exhibition conceptualizes plants as a possible inspiration for political activity – with their resilience, adaptability and communication skills as well as their indifference to state borders. The exhibition space was turned here into an anarchist laboratory of the revolution-to-come, which would become possible through interspecies exchange. Both exhibitions encourage to reject the common conceptualisation of a plant as a mechanistic thing that only reacts to simple stimuli, leading to a vision of significant continuity between humans and plants, which – dynamic, breathing and growing – possess intentionality and even memory. The presentations attempt as well to free the world of plants from the reactionary context of interior design magazines and superficial eco-trends, revealing their emancipatory potential leading to social transformation. An important part of the lecture will be an analysis of the extraordinary design of both exhibitions developed by sculptor, collector and curator Mateusz Okoński.

Aneta Rostkowska is a curator, researcher and writer, and a graduate of the de Appel Curatorial Programme in Amsterdam. She is pursuing experimental curatorial practices in which politically relevant storytelling develops through carefully constructed sensual environments. Rostkowska studied philosophy, economics and art history in Kraków, Poznań, Heidelberg and Frankfurt am Main. From 2016 to 2018 she worked as a curator at the Academy of the Arts of the World in Cologne. Since January 2019 she is a director of Temporary Gallery, Centre for Contemporary Art in Cologne.

Bilder
Saddie Choua, Take care of yourself and join the revolution, 2019, Installation 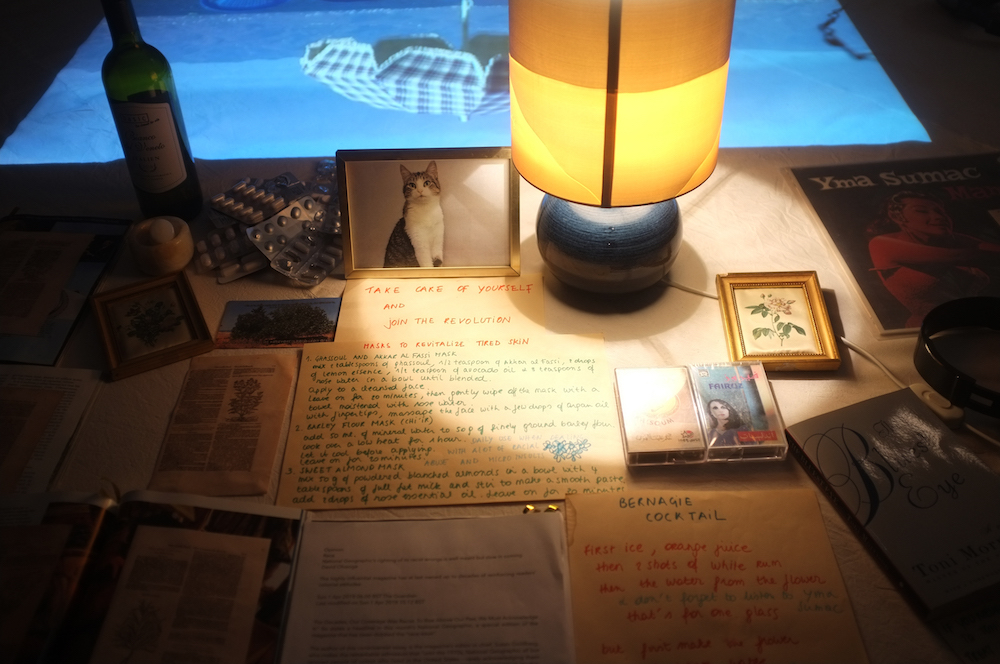