THE ART OF THE LECTURE
7 October 2021
Guest event

»The art of the lecture« invites eight performances from the German-speaking and exYu region to Cologne in October and November 2021. In essay performances, choreographies of thoughts and card-reading practices the series provides alternative and speculative perspectives on known and unknown fields such as healing, the art market, the dark net or the lectures of the sophists.

The works presented in this context are informed by the ›tradition‹ of lecture-performance that arose in the noughties, but whether they develop or challenge the format remains an open question. They employ strategies of partisanship and trickstery, and initiate a dialogue with themselves, their artistic materials, their compositional form, and their audiences. The art of the lecture is interested in what we call knowledge co-creation, rather than knowledge production.

We would like to think of the title of the series in multiple ways: the art of the lecture could be the art of lecturing, the lecture as an art form, the artistic lecture or the lectured art. The series on contemporary lecture art is curated by Helen Brecht, Nina Gojić, Jascha Sommer and Zrinka Užbinec.

Admission on a donation basis. Registration will be on site. Please come tested, vaccinated, or recovered. Detailed information under vkunst.eu.

That something is and is not at the same time is a logical error according to the law of the excluded middle. The Sophists did not refute this but were constantly concerned with softening contradictions. They resisted the supposed constraints of logic and were compared to plants that talk confused and incomprehensible. 2400 years later, Jacob Bussmann, Rahel Kesselring and Henrike Kohpeiß subject the texts of the sophists to a musical reading.

Jacob Bussmann lives in Frankfurt/M and works as a musician and performer. He received his musical education in Frankfurt and Helsinki and holds a Master's in Applied Theatre Studies. He collaborates in varying constellations, together with Rahel Kesselring, Henrike Kohpeiß and Hanna Steinmair he developed the concert performances »Sophisticated Songs«, »Sceptical Birds« and »Panic Noon«.

As a continuation of the work on practices of divination developed within the Björnsonova artistic platform, Tamara Antonijević and Tanja Šljivar developed a reading performance to tackle one witch with endometriotic superpowers and almost all the hags of the world. The hag lingers, the witch's endometriosis lingers – they are both here to stay.

Tanja Šljivar is a Belgrade-based playwright interested in the role and position of the text in different media, formats and systems of representation. Tamara Antonijević, currently based in Berlin, writes and works as a dramaturg and artistic collaborator in theatre, performance and the visual arts, focusing on the role of the text in the collective process.

For the performance of Jessika Khazrik we change the location together.

Stemming out of our ›post-coronial‹ and eternal search for healing, »قرابادین Pharmacopoeia« is a long-term music, hyper-media and research project probing the interlinks between remedies and قرابادین» ,media. Through a trans-millennial, interdisciplinary and open-access approach to knowledge Pharmacopoeia« seeks to exhume and de-mystify systems of burgeoning knowledge and experience. It is inspired by combinatorial practices in medicine, music and magic. Launched at the advent of 2021 through a series of seven hyper-video anti-ads, the project has so far embodied the forms of seven scores, published text, radio conversations, a steganographic scroll and a prelude to a trans-millennial compendium on healing.

Jessika Khazrik is based between Beirut and Berlin. Her interdisciplinary artistic practice ranges from music composition to machine learning, ecotoxicology, cryptography, performance, visual art and history of science. Khazrik holds BAs in Linguistics and Theatre from the Lebanese University and a MS in Art, Culture and Technology from MIT. Her work has been presented at the Kunsthalle Wien, Haus der Kulturen der Welt, the Museum of Modern Art Warsaw, Arab Image Foundation, Times Museum Guangzhou, among others. She often collaborates with artists and labels on album art and text and DJs under different names. 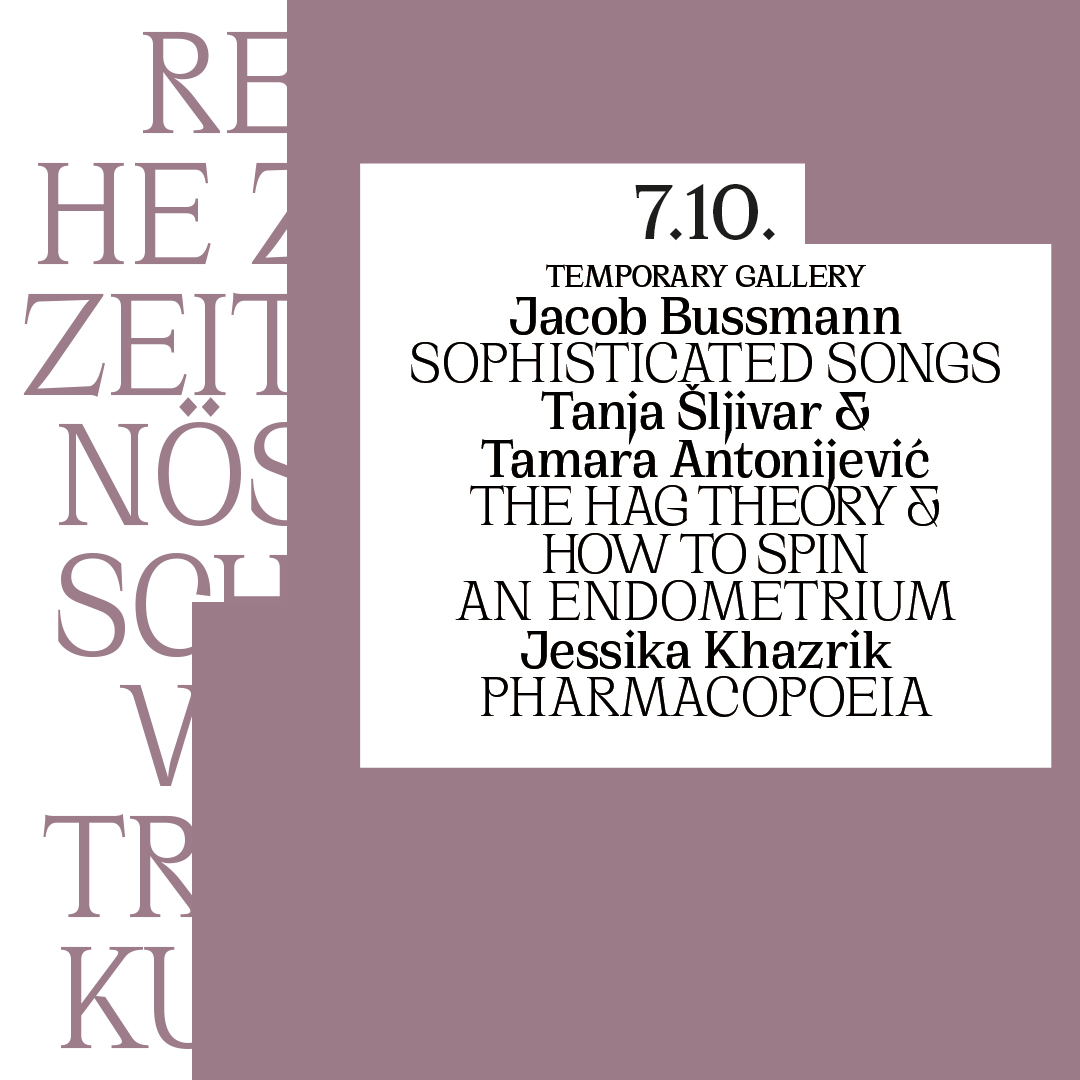