When it comes to truth I wouldn’t dare to tell it. Performance by Mohamed Abdelkarim

When it comes to truth I wouldn’t dare to tell it”
A narrative anthology consisting of anecdotes, poems, songs and radio drama.

The performance is a sub-episode from the series “Dramatic Episodes About Locomotion” (since 2014) by Mohamed Abdelkarim, a performance and essay based project that explores myths, histories and ideologies by employing a variety of aesthetic forms: from poems and prose to narrative; from oral storytelling to religious rhetoric. Personal anecdotes are interwoven here with historical events in which real and imagined protagonists appear. The collective desires crystallize into fictitious personae. As a result a speculative historiography emerges that relies as much on conspiracy theories, plays and dramas, as on facts; a performative essay in which the historical truth unfolds as an encounter between an event and its manifold mediation. Conceptually the project consists of a re-reading and re-examining the opposition between materialist and cultural vision of history through different social phenomena such as religion, gender, nationalism and identity. It utilises stories from the medieval era as a paradigm to understand contemporary issues. In this episode, the project revisits a number of stories through the performer Haroun Kanshour whom the artist imagined and he encounters with. Stories float over characters that are marginalized in what is known as History.

Mohamed Abdelkarim is a visual artist, performer and cultural producer. After completing his M.A. at ECAV/Edhea, Switzerland, he turned towards producing text-based performances and became committed to performative practices based on a multidisciplinary research, employing and reflecting different instruments of mediation like narrating, singing, dancing, detecting and doing. In Abdelkarim’s performative works, the script bears witness to the research experience. The emphasis is on the process, as a reflection on production and cultural genealogy. This process is open-ended, and non-linear. His performances have been included in Guild Master of Cabaret Voltaire Manifesta11, Zurich, 2016; Sofia Underground Performance Art Festival, Bulgaria, 2016; Live Works Performance Act Award Vol.5, 37°EDIZIONE DRODESERA, Italy, 2017. As part of his performative practice, he established „tadbiqat“ - a performative project that brings together lectures, debates, readings, critical responses, and creative quests, alongside with organising performance nights under the title of "Live Praxes”. Abdelkarim currently lives and works in Cairo.
Image: Mohamed Abdelkarim, A Gift to Those Who Contemplate the Marvels of Renegades, Centrale Fies 'live works', Italy, 2017, photo by Alessandro Sala. 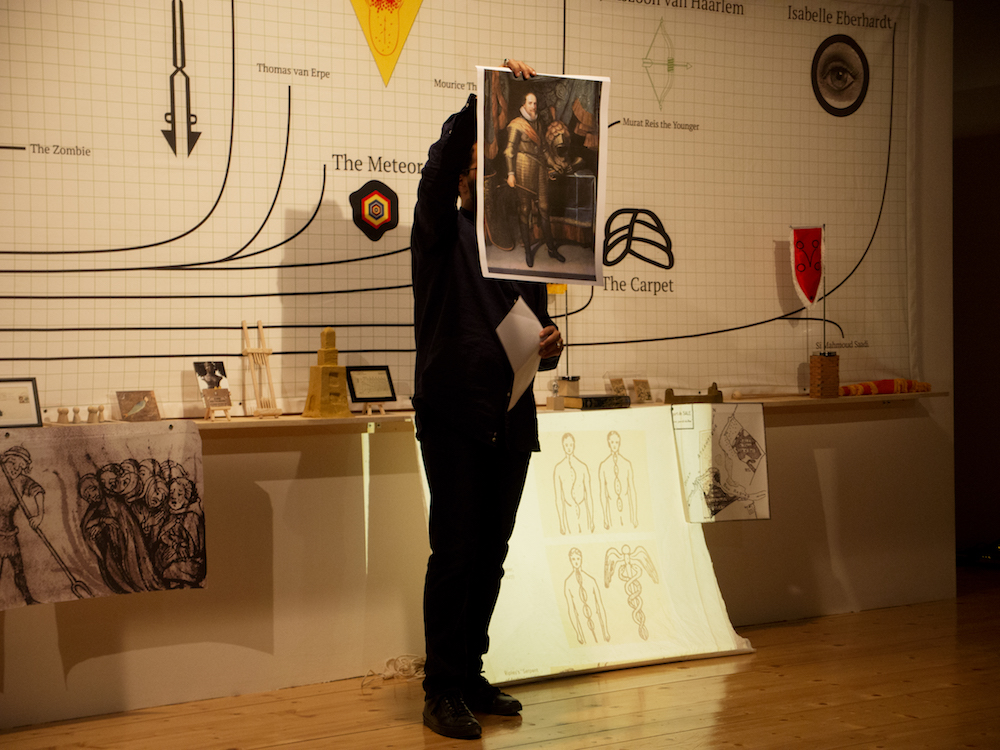